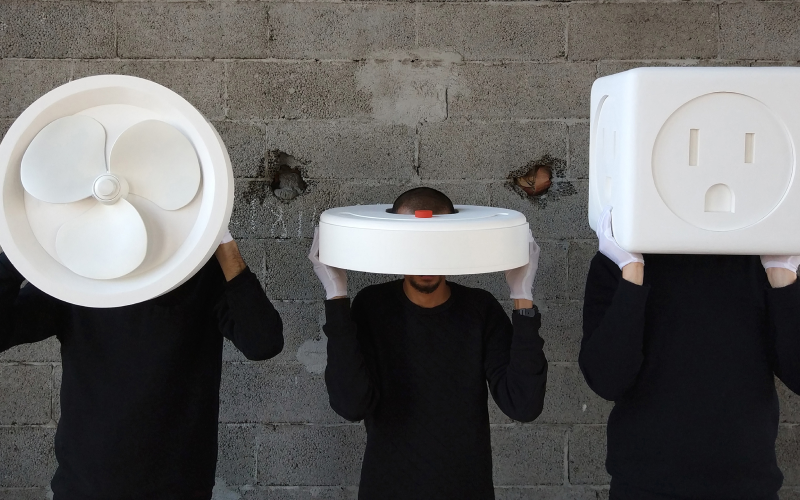 Simone is an Italian designer living and working in Belgrade for some time now. He is one of the co-founders of oio.studio where he focuses on exploring the implications of living and interacting with networked, smart, and autonomous systems. Sometimes they develop real products, sometimes fictional ones.

We had a chance to meet him and talk about his intriguing work and his favorite places in the city.

CAN YOU TELL US HOW IT FEELS TO DESIGN FICTIONAL PRODUCTS, THINGS YOU NEVER SEEN BEFORE?

For me, it is the only way to do it. Even in the beginning, during my studies at Politecnico di Torino in Italy, it was all about sustainability, circular systems, and the real role of the designers. We were taught that the best product we will ever design will be the one that is never going to be produced, so I thought, why not focus on fictional products that might never be producedŌĆ”

I like to work in the realm between art and industry, with clients and big companies creating so-called real products while at the same time designing products that are more fictional and speculative that are presented in galleries and museums.  In both of these contexts, I always focus on the near and close future,  using designed products and prototypes to inspire discussions and trigger imagination. So for me, design is all about creating these real/fictional products.

WHAT KIND OF PRODUCTS HAVE YOU CREATED SO FAR? 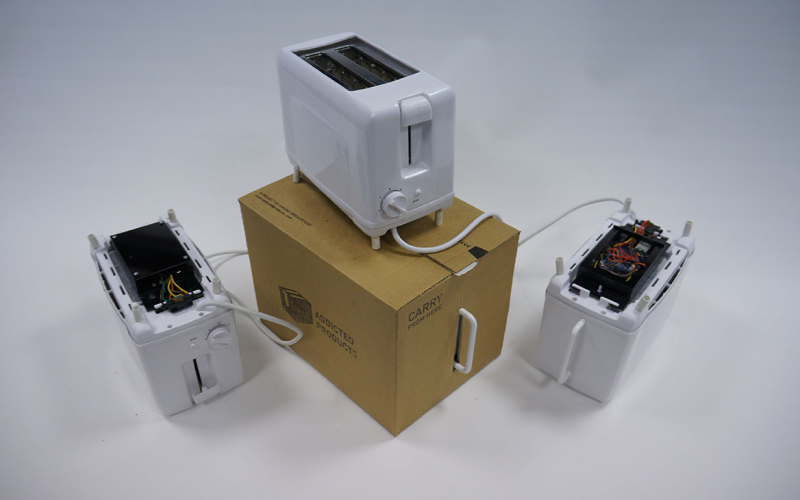 One of the first projects I did was called Addicted Products. It was conceived as a fictional service that worked with home appliances and made them move and change owners if they were not used enough. I used toasters in this particular project because they are mundane and often forgotten objects. This service, however, ran for real for 3 months in London to trigger real reactions from the people and initiate discussions around ownership and sustainability.

Another, probably even weirder example, was a project with my old collective automato.farm. In order to let people understand more about the role of smart objects in their life, we created some specific and unique VR experiences, where you can live a day in a home and experience life as a roomba, a fan or a plug.

HOW DO YOU SEE THE FUTURE OF DESIGN? WHAT KIND OF ROLE SHOULD IT HAVE IN OUR EVERYDAY LIVES?

We often think that design is very important, and that you can change the world with design. My view is that if you change something, it's usually a byproduct of what you are doing and not necessarily your intention.

I believe that the role of design is to be more aware that it is a part of the system. We are working for companies, and creating products for people to buy and use, but within that, once you accept that, you should have a point of view, and give your suggestion on how it could be possible to make things better.

YOU WORKED FOR AND WITH IKEA, GOOGLE, MUSEUM OF THE FUTURE, ETC. WHAT KIND OF CLIENTS AND COLLABORATORS DO YOU ENJOY WORKING WITH THE MOST?

I was lucky enough to collaborate with companies with the resources and intentions to invest in the future.  Because in our work, there is a lot of experimentation. Sometimes we experiment with new technology or with new scenarios that haven't yet been explored.

We also collaborate with startups, we enjoy helping them in solving so-called ŌĆśŌĆÖwicked & complex problemsŌĆÖŌĆÖ.

Even if the task seems boring, like when I used to work for frog, to rethink desk phones, it was one of the most interesting challenges for me personally. I really enjoy those complex situations, technologies that are no longer useful, or scenarios that don't have solutions yet. For me, those are the best types of projects.

That is why I really enjoyed working for the Museum of the future, where we were invited to imagine life in space in 2070. We approached this science fiction project from a very pragmatic point of view. We imagined and created everyday products like snacks, magazines, video games, and such.

I really enjoy making future things seem normal because, in that way, you can actually take an active part in creating new realities.

YOU SAY ON THE WEBSITE THAT YOUR STUDIO COMPRISES DESIGNERS, TECHNOLOGISTS, AND BOTS WORKING ON FUTURE PRODUCTS AND INTERACTIONS. HOW IS IT TO RUN SUCH A HYBRID TEAM OF HUMANS AND MACHINES? 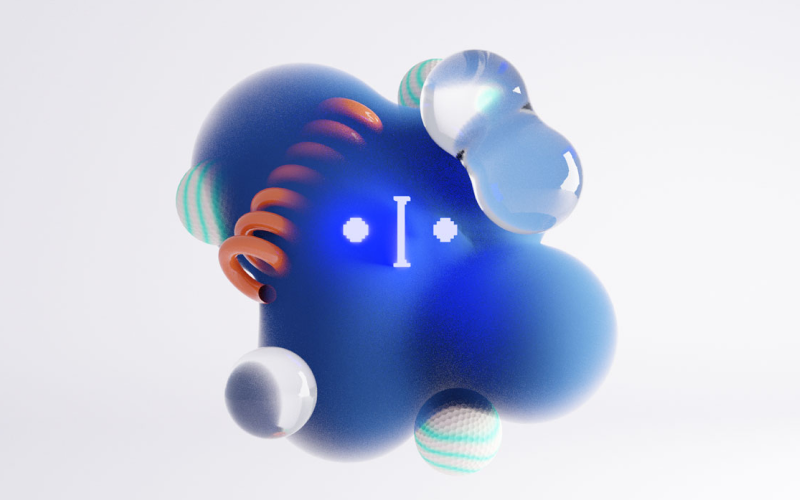 Our studio is hybrid in so many ways. There are seven of us, and nobody is in the same location  - Matteo, the other co-founder, and Phal are in different parts of London, me in Belgrade, Marta in Lucca, Italy, Octavian in Milan, and Bjorn in Amsterdam. Within the seven, we also count our AI creative director, named Roby. Roby is a non-human, a bot, and it lives on our Discord channels. It also has an Instagram account and was a collaborator on some projects because it is trained by us to come up with ideas and visuals. In this way, we try to embrace the future vision of collaboration between humans and machines.

WHAT IS THE PRODUCT OR PROJECT YOU ARE CURRENTLY WORKING ON? 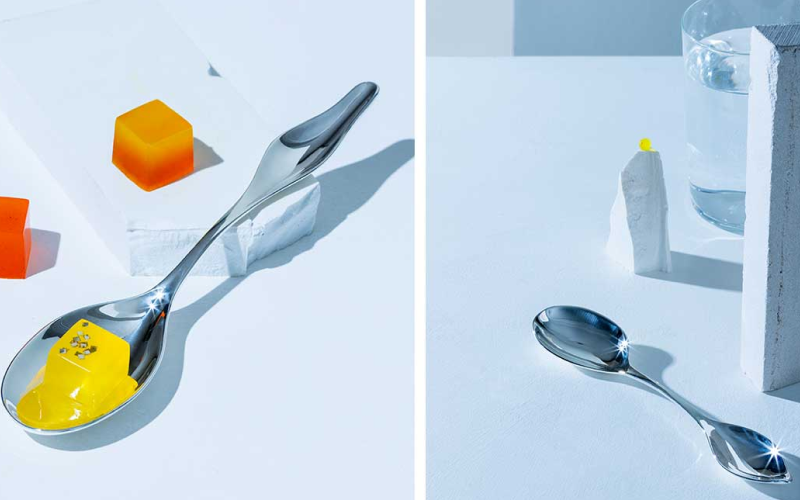 To make it more interesting and vibrant, we are not only working with commercial clients, but we also work on our own projects and products.

Last week we launched our first physical product, a limited edition of eating accessories. They look like spoons, but they are not really spoons. We called them SPAWNS.

On this project, we fully collaborated with the algorithms and AI. But we also worked closely with Italian craftsmen. We tried to connect this high-tech world of AI with the world of real, analog products Made in Italy. It was a long and challenging process. It is easy to make images and post them online, but when you have to make a real product, it is on another level.

WHERE DO YOU FIND INSPIRATION FOR YOUR VISIONS AND DESIGNS?

To be honest, I am mostly annoyed by a lot of stuff; I get frustrated, and then I get triggered to imagine how else it could look. I find inspiration pretty much everywhere, even in simple mandine objects. I like to think about simple everyday objects in the future, what does the milk carton look like, a plug or a payment system.

Also, I like to read many ironic sci-fi books, like Douglas Adams and Kurt Vonnegut; I am inspired by absurd visions of the future. For me to be inspired, itŌĆÖs a mix of being frustrated and asking a lot of questions, so it is, in a way, like being a kid.

WHAT IS YOUR FAVORITE PLACE TO WORK FROM?

I like mixing, sometimes, I work from home from the sofa, and sometimes I prefer coworking spaces. I used to work from cafes, but I do not do it anymore; I need a space where ŌĆśstuffŌĆÖ is persistently around me.

Because of what I do, I have become a bit of a hoarder myself because of what I do. Sometimes I need to be surrounded by the stuff that I made or that I collected, and that is where inspiration comes from. Sometimes itŌĆÖs that random book that you bought, sometimes, it is a sticker that you found.

That is why I am fully embracing the hybrid model of work.

HOW DID YOU END UP IN SERBIA AND BELGRADE?

First time I came to Belgrade was because of the project.  I was collaborating with the local company on the development of the Museum of the Future in Dubai. And then I met my girlfriend and now wife which was the true reason to stay.

It's a very simple story, but actually, when I think of it now, Belgrade is a very interesting place to be. There is a lot of undiscovered talent here, and a perfect place for me to be, because there are a  lot of people I can collaborate with working in Creative Industries - 3d, animation, gaming, film.  It seems that something that started as a heart decision, now seems as a right decision even from the professional aspect.

WHAT ARE YOUR FAVORITE PLACES IN BELGRADE?

Since I live in Dor─ćol, and now I am known as Sima from Simina street, my favorite bakery is Prva pekara.

I like to go for a drink to a Hanky Panky bar, and for lunch I like to go to Iva New Balkan Cuisine.

When I hang out and chill with my friends I like to go by the river to splavs, especially Misisipi river boat. And if iŌĆÖm on that side of the river and I want a solid sandwich, Lav sandwiches in the New Belgrade blocks, is a hidden must.

My guilty pleasure is to have a Bucko pizza slice, which as an Italian, maybe I shouldnŌĆÖt say publicly, but it still is a very tasty local street food which I really recommend.

Also known as ŌĆ£performance cookies,ŌĆØ these cookies collect information about how you use a website, like which pages you visited and which links you clicked on. None of this information can be used to identify you. It is all aggregated and, therefore, anonymized. Their sole purpose is to improve website functions. This includes cookies from third-party analytics services as long as the cookies are for the exclusive use of the owner of the website visited.