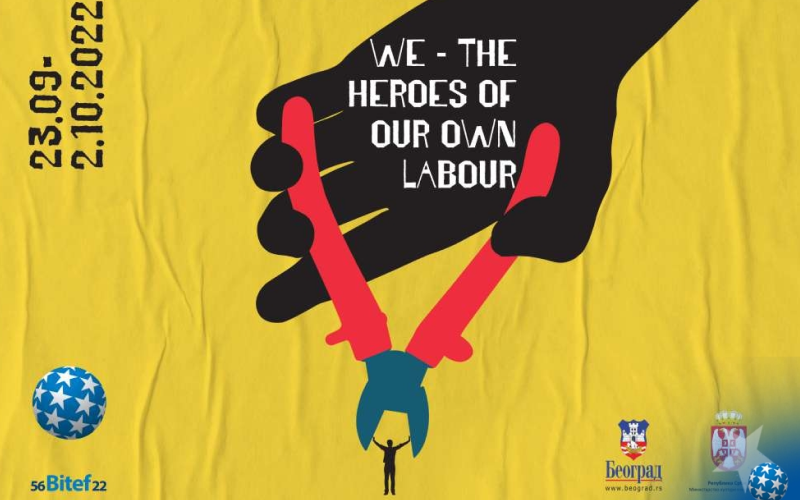 The fall season is fast approaching and Belgrade‚Äôs cultural scene is kicking quickly into gear. On the city‚Äôs cultural constellation of September festivities, one star shines the brightest. That‚Äôs Bitef.

What in the world is it? ‚Äì we hear you ask. Well, in a nutshell, Bitef is a downtown theater and its namesake annual festival. A slightly longer answer would be that Bitef (short for Belgrade International Theater Festival) is one of the biggest and most compelling contemporary theater festivals in Europe with over 50 years of running, and featuring the latest tendencies in concept, dance, and performance art productions. But the long and short of it is, it‚Äôs good. Consistently good.

This year Bitef takes place from September 23rd until October 2nd, with a total of 9 main programs and over 20 side productions on schedule. The main program hosts productions from Serbia, Germany, Great Britain, Mexico, France, Belgium, and Slovenia, all grouped under the umbrella slogan We, the Heroes of Our Own Labour.

Granted, the first-time festival goers may find picking out what to see somewhat daunting. This is precisely why we‚Äôve decided to help you navigate its avant-garde and classic waters by offering our pick of the bunch. Thank us after the shows.

any attempt will end in crushed bodies and shattered bones

The 56th Bitef opens up with a dance performance staged by the celebrated Belgian choreographer Jan Martens and elaborately titled any attempt will end in crushed bodies and shattered bones. A total of 17 dancers ages 18 to 71 dancing away in thoughtful commentary on labor and its predicaments that is both witty and urgent in the same breath. Sign us up.

(Not) the End of the World

Another unmissable production is the (Not) the End of the World performance staged by the world-renowned director Katie Mitchell. It‚Äôs an environmentally conscious slash collage-like slash audience-focused production that places climate change front and center. The curiosity here is that the electricity needed for the production is generated the old-fashioned way ‚Äì by pedaling bikes on stage.

To wrap things up we‚Äôve got three eccentric concept performances of which Bestiary probably stands out as the most outlandish. In it, a single performer digs deep into his animalistic nature and runs around a pop-up ring on all fours in an attempt to raise questions about human nature, and the nature of play, and push us to think outside the box.

The corollary to it comes to the Sound and Body circus performance! That‚Äôs right, all the bells and whistles that come with the quality contemporary circus are here. We‚Äôve got our performers jumping through hoops, executing a couple of neck-twisting movements, and dancing to our heart‚Äôs content.  And all of that, mind you, as if moved and pulled by the eerie impromptu music played in the background.

The Solo performance on its part, takes improvisation to a whole new level. Contrary to its title, it is a 4-performer, nearly 4-hour project that asks the most fundamental questions of theatre and the self. The performers on stage (of which director Nina Rajiƒá Kranac is one) act to a free-wheeling unscripted narrative, manipulating cues on stage and inviting audiences to participate in their antics.

Nothing really, just come to Bitef. There are plenty of performances to pick from and you‚Äôre sure to find something to tickle your imagination. Besides, they‚Äôre all very well presented on the festival‚Äôs website so check that out as well. Now.

For similar relevant information about the cultural scene in Belgrade, visit our Belgrade Insights page.

This article is made possible by the support of the American people through the United States Agency for International Development (USAID). The contents of this program are the responsibility of Nova Iskra and do not necessarily reflect the views of USAID or the United States Government.